What he showed me in my thoughts was a kind of a story. I don’t know how accurate it is, but it goes a little something like this:

The Distrust of Love destroying my state of being where love and joy abounded.

A long time ago, I had a state of being inside me, like a city, in which there was an abundance of love, justice, and joy. It was wonderful to live in. Then, one day, a being appeared, like a giant snake wrapped around the city with a crazed look on its face. It had feelings of doubt and resentment towards this state of being. The people living in the city tried to fight it, but because they doubted themselves, didn’t know the reason for the snake being there, and thought that maybe the snake’s view on life was correct, they could not defend the city. This city, this state of being, no longer exists – and nothing inside me knows how exactly it fell or what can be done about it right now.

So that was the reason why my Irresponsible Self feels so much emotional pain a lot of the time. He has a deep longing to reclaim that city, but doesn’t know how. It’s frustrating for him.

After this initial finding, I thought that perhaps there might be a way to confront the snake directly, and that it might bring about an end to all this madness. I decided to stretch myself a little and imagine myself visiting the snake. I don’t regularly feel its presence, and it could have died a long time ago after causing its destruction, but no harm in trying, right…?

In my processing, it seemed as though I found the real thing. In the process of talking with it, I began to realize just what this thing was: a Distrust of Love.

This snake thing seemed to dislike and distrust love, and claims that it doesn’t want to be restricted to only one way of living. All that lovey-dovey, heartwarming crap – right? “There’s more to life than that!” – that’s what it says.

Yeah, right. But in the mean time, this part of ourselves destroys what is good and whole in our lives, it creates rifts, doubt, ambition, and hate. But I can’t be too quick to fight it. Why? Understanding. I don’t understand this snake yet, so I can’t blindly fight it. In order to truly make anything harmful inside of you stand down, you have to find a better way for what it’s seeking. That means, it seems to me, the only thing that can defeat it is that in one’s self which desires both freedom AND love. If the two align, everything this snake stands for is toast.

What the heck does this have to do with day-to-day life? Perhaps it’s a glimpse into one of the root causes of emotional havoc and pain: a fundamental distrust of love, for the sake of freedom.

I get the sense that these inner demons I’m coming across are aspects of this guy, and that eventually I’ll be able to face him down, and see what’s on the other side. But then again, it’s just a theory… I have no immediate evidence. And for me to start making plans or strategies on how to deal with stuff I haven’t even run across yet is just foolish.

So why is love ever distrusted, in even little, small ways? Maybe it’s something we don’t understand yet, and because we don’t, we don’t want to rely on it. Perhaps we’re afraid that we’re missing out on life if we just live in a place of love all the time. Maybe we’re scared about how others will react to our love. Maybe it’s a lot of things.

All I know is: Distrust of Love is (probably) not to be trusted. It’s violent to your inner and outer world, and is more than willing to cause harm. And I’m willing to find out the rest of the truth of this whole deal. Are you?

EDIT PLEASE READ: I am no longer sure that I was told the right story by my Irresponsible Self. This “Distrust of Love” as I call it may be a force of inner freedom. Maybe the Ideal world my Irresponsible Self longs for is only that: an ideal. I can’t be too quick to condemn anything I don’t understand. Everything has its reason for being.

Fable with the moral, “to enjoy our blessings we must have freedom.”

The Harry Potter Series – this snake seems a lot like Voldemort… 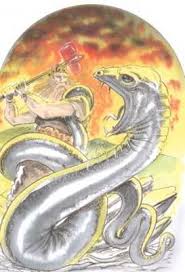 Now you can fantasize about this. Read more.

Support The World Within on Patreon!